I have been writing for half a century, having begun as a contributor to New Society in 1963 – a journal dedicated to analysing the changes in British society which began after World War Two and which were in effect completed by the Thatcher era. I subsequently contributed to many national papers and magazines, including New Statesman, The Guardian, The Times and The Independent. For seven years I was a columnist with The Statesman in Kolkata, India. I also wrote plays for stage, TV and the theatre. I have written 40 books, most of them concerned with the nature of ‘development’, social and economic justice and the interaction between economy and ecology.

I have worked with numerous collaborators, notably three books with Winin Pereira, the former atomic physicist in Mumbai; four books with Trevor Blackwell on radical politics after Labour; many radio and TV plays with Michael O’Neil; the theatre play Heart Throb with Anna Mottram, and in 2013, a book with Imran Ahmed Siddiqui ‘People Without History – India’s Muslim Ghettoes ’.

My first book was The Unprivileged, 1967, the story of my own family, a path breaking oral history from the late 18th century to the 1960s. This was followed by City Close-Up, a portrait, through the words of the people, of Blackburn in Lancashire.

In the 1970s, I wrote What Went Wrong? Working People and the Ideals of the Labour Movement; a book which, when published in the USA, was sub-titled Why hasn’t Having More Made People Happier? 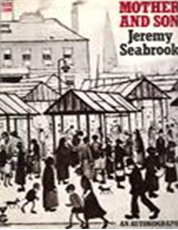 Mother and Son, a memoir, appeared in 1980, and an indictment of Thatcher’s Britain, Unemployment, in 1982.

Work on India and Bangladesh followed, notably, Notes from another India and Children of Other Worlds, a comparison of child labour in nineteenth century London and present-day Dhaka in Bangladesh. My book, Love in a Different Climate in 1999, described how male same-sex relationships in India differ from those in the West. In 2004, I published Consuming Cultures: Globalization and Local Lives, andtwo short books for New Internationalist, The No-nonsense Guide to Class, Caste and Hierarchy’ in 2005, and The No-nonsense Guide to World Poverty in 2007.